Apple recently surpassed to become the first trillion dollar company in the world, what could have been its odds a decade ago? When Steve Jobs (owner of the company) passed away 7 years ago, Apple’s net worth was around $350 Billion dollars. That’s one thing he surely would be proud of, up in the heavens.

Of course, all the credit goes to its glorious products and amazing customer experience which are offered by Apple to its customers. This is the main reason why Apple has a sturdy client base. Apple becomes the priority for those customers who are willing to spend an insane amount of money on the quality hardware.  iPod, iPad, Macbook, iPhones, and home pod etc are the products which are sold in the markets. These products are of superior quality which always had the potential to grab a huge market share.

Why the Trillion Dollar Milestone Got Delayed?

Although now, corporations like Samsung, Xiaomi, Vivo, Oppo and Huawei are giving cut throat competition to Apple by making cheaper products; Believe it or not, Apple does not have a good market share in laptops; Samsung and HP are way ahead of them, even if we talk about iPod, most of the people today will not buy the iPod because listening music has become so easy and hassle-free on your phones (thanks to Spotify, Soundcloud and Youtube). Apple’s iPad and Watch are some great products but we can easily see their limitations.  Apple home pod and ear pods are of great values but certainly not their core business. Apple iPhone is of great value but the pricing of Apple products is insane which not everyone could not afford.

Can Apple Do Better?

Apple products can be easily classified into the BCG ( also known as the Boston or growth-share) matrix. every business is aware of that, It consists of products which are high revenue generating at present and identify the ones that could be in the future. It also identifies the products that are a waste of resources without the capacity to come back. While it’s easy to find profitable products, regulating how the rest of your portfolio fits into the growth scheme can be difficult. The BCG matrix was designed as an analysis tool to help you control the role of products in your future profit margin so you can decide where to invest. It provides a framework for examining products according to growth and market share. The BCG matrix has been used since 1968 to help companies to categorize business on the basis of market share and growth rate.

Basically, Apple products are classified into 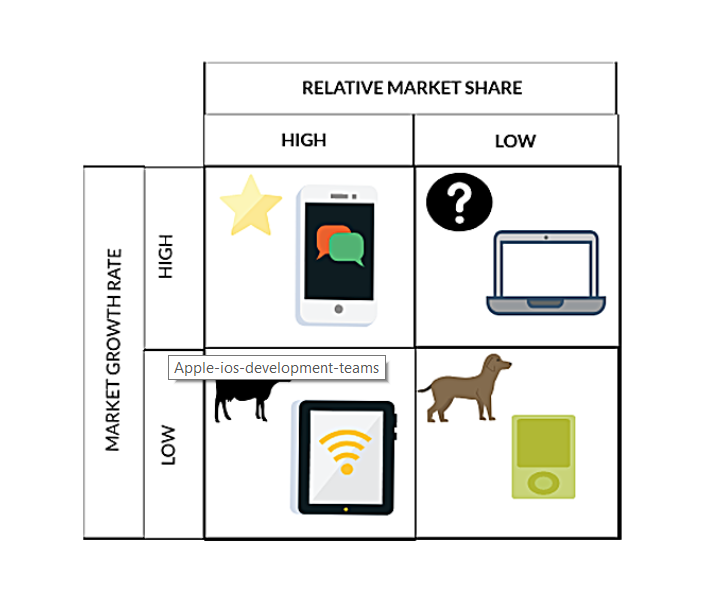 Stars: The products that have a high market share and generate the massive amount of cash are considered stars. However, because of their high growth rate, stars also requires a  vast quantity of cash investment. Stars can eventually become cash cows if they retain their success until a time when the market growth rate reduces. Companies are advised to invest in stars. for Apple, Apple associates phone as a star for the company. iPhone has a huge market share, Apple is the second largest mobile seller in the world. Apple generally needs a high amount of money to invest in this product line and can expect huge market returns from them.

Cash cows: Cash cows are the cash generator for the corporation. These are business units or products that have a huge market share but low growth prospects. Apple’s iPad is a cash cow for the Apple, this product line generates the huge amount of cash for the company but it has a limitation; that it has low growth prospects.

Dogs: dogs are business that has both a low market share and a low growth rate. It is generally advised to divest in this business. Every Business should try not to invest more money in this business.they are bringing back basically nothing in return. For Apple, the iPod is basically a dog because the use of the iPod has become outdated. Nowadays the whole concept of having an iPod goes waste when we already have mobile phones in hand.

Recently we heard a news about the launch of the new iPhone x which undoubtedly could be, and probably will be sold for $100 more than the current iPhone X model.

Those are the low-hanging fruit. To continue beyond the trillion-dollar mark (again, nuts) and keep ahead of Amazon, Apple needs to think for future. An “Apple Prime” offering would undoubtedly satiate Wall Street for some time, as would further affecting the Chinese market, or figuring out the Indian market. But at the end, with Apple, you grow or don’t grow based on amazingly great hardware products. The iPad is really good but it has restrictions. The watch is good and growing, but not everyone feels the need of having a watch. The AirPods is a futuristic concept, but will probably never be a main core product line, so with the home pod; the question arises that all the wealth accrual is done for the world, for the US—for Apple? The iPhone is one of the best creation of Apple that has been used by most of us and nearing half the world’s population gain access to the internet wherever they are. the smartphone has become more of a slot machine, where we passively feed a little time and money in, and sometimes—rarely—get something great in return.

For such an innovating company, success and hard work are in its DNA and many market pundits believe: it’s just a starting for Apple 2.0, they would be raring to go and pass the $2 trillion figure.  Whatever the time frame it could be, we all believe in Apple and have full faith in their products and the legacy it is creating.

What is your favorite Apple product? Comment below your answers.