Big data is surely the hottest technology in this decade. Not many people know it “in and out” but surely they like to Flaunt it. Use of the term “big data” has become as prevalent as the phenomenon itself.

The discussion of “big data” has generated colossal insights into business management and led companies to rethink their strategies, implementing perceptive and meaningful methods of applying the wealth of information available in the 21st century. It was mentioned at Oracle Open World multiple times; companies are readying themselves to handle so-called Big Data and devices are being developed to handle Big Data. Those who might not have glued themselves to their devices reading news related to technology constantly, the term Big Data could be foreign to them.

What is Big Data?

The symbols, quantities or characters on which operations are performed by a computer, which may be stored and transmitted in the form of electrical signals and recorded on magnetic, optical, or mechanical recording media. Nothing is new about the discernment of big data, which has been around since at least 2001. In a nutshell, Big Data is your data. It’s the information owned by your company, obtained and processed through new techniques to produce value in the best way possible. Companies have sought for decades to make the best use of information to improve their business capabilities. However, it’s the structure (or lack thereof) and size of Big Data that makes it so unique. Big Data is also unique because it represents both important information – which can give way for new opportunities – and the way this information is analyzed to help open those doors. The analysis goes hand-in-hand with the information, so in this sense “Big Data” represents a noun – “the data” – and a verb – “combing the data to find value.”

An exact definition of “big data” is difficult to cover because projects, vendors, practitioners, and business professionals use it quite differently. With that in mind, generally speaking, big data is:

In this context, “Large database” means a database too large to realistically process or store with traditional tooling or on a single computer. These Datasets are constantly shifting and becoming unmanageable and may vary significantly from organization to organization.

Some Examples of BigData :

*10 TB of data is generated by Jet engines in 30 minutes of a flight time. With many thousand flights per day, generation of data reaches up to many Petabytes.

*The Stock Exchange of New York generates about one TB of new trade data per day.

* Facebook generates 4 million likes every minute and more than 250 billion photos have been uploaded on Facebook till date.

The term structured data generally refers to data that has a defined length and format for big data. Over the period of time, with advancement in computer science have achieved greater success in developing techniques for working with such kind of data (where the format is well known in advance) and also deriving value out of it. However, data scientist nowadays, have forecasted issues when the size of such data grows to a huge extent, typical sizes are being in the range of multiple zettabytes.

Requirements for working with big data systems are the same as the requirements for working with databases of different size. On the other hand the massive scale, the speed of ingesting and processing, and the characteristics of the data that must be dealt with at each stage of the process present significant new challenges when designing solutions. The main goal of most big data systems is to exterior insights and connections from large volumes of data that would not be possible using usual methods. And other characteristics that make big data different from other data processing:

The utter piece of the information processed, basically defines big data systems. The database can be larger than traditional databases, which hassle more thought at each stage of the processing and storage life cycle.

Repeatedly, because the work necessities exceed the capabilities of a single computer, this becomes a challenge of analyzing, allocating, and coordinating resources from groups of computers. Algorithms capable of breaking tasks into smaller pieces become drastically important.

Big data differs extensively from other data systems due to the speed of information moves through the system. Data is regularly flowing into the system from different sources and is often likely to be processed in real time to gain insights and update the current system.

Feedback has taken many big data practitioners away from a batch-oriented approach and closer to a real-time system. Data is constantly being processed, added, and analyzed in order to keep up with the flow of new information and to surface valuable information early when it is most appropriate. Ideas like this require vigorous systems with highly available components that protect against failures in the data pipeline.

Problems that occur in big data are often exclusive because of the wide range of both the sources being processed and their comparative quality.

A database can be taken from internal systems like application and server logs, from social media and other external APIs, from device sensors, and from other users/providers. Big data seeks to handle the information potentially regardless of where it’s coming from by combining all information into a single system.

The content and types of media can differ significantly as well. Media like Photos, video, and audio recordings are used alongside files, structured logs, etc. While conventional data processing systems might expect data to enter the pipeline that is already formatted, and pre-arranged, labeled big data systems usually accepts and stores data closer to its original state. Preferably, any changes to the original data will be in the memory at the time of processing.

Different folks and organizations have suggested expanding the three features, though these proposals have tended to describe challenges rather than qualities of big data. Some common characteristics are:

Big data is not a furor. We are just at the beginning of a revolution that will impact every business and each life on this planet. But different folks are still treating the concept of big data as something they can favor to ignore — when actually, they’re about to be run over by the force that is big data.

Don’t believe me? Here are 1o stats that should convince anyone that big data needs their attention:

1. Data is growing swiftly than ever before, and by the year 2021, about 2 MB (megabytes) of new information will be created every second for every human being on the planet.

2. And one in all my favorite facts: At the moment less than 0.7% of all data is ever analyzed and used, just imagine the potential here.

3. 75% of organizations have already invested or plan to invest in big data by 2017

4. The White House has already invested more than $200 million in big data projects and R&D.

5. The Hadoop, an open source, Java-based programming framework that supports the processing and storage of extremely large data sets in a distributed computing environment market is forecast to grow at a compound annual growth rate 58% surpassing $1 billion by 2020.

7. Data production will be 44 times greater in 2020 than it was in 2009. Individuals create more than 70% of the digital universe. But enterprises are responsible for storing and managing approximately 80% of it.

8. It is approximated that Walmart collects more than 2 petabytes of data every hour from its customer transactions. A petabyte is one quadrillion bytes or the equivalent of about 20 million filing cabinets’ worth of text.

9. According to McKinsey (worldwide management consulting firm), a retailer using Big Data to its full potential could increase its operating margin by more than 63%.

10. The data volumes are literally exploding, more data has been created in last 24 months than in the entire lifespan of the human race. 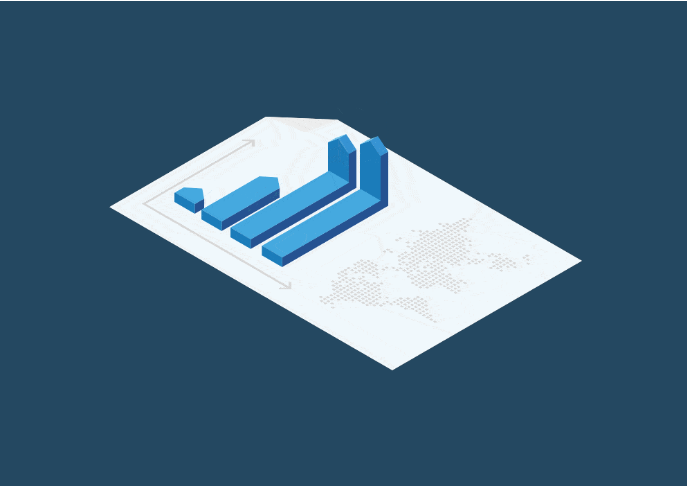 There have been a few “flash in the pan” products and technologies over the years, which started brightly then burned out. WebTV, Micro Channel Architecture, and the OS/2 operating system are just a few examples. In each case, it might be argued these products foundered because there was no clear perception by the public of the need or purpose for these products. In the case of Big Data, there is a perception of the need for data analysis as well as the benefits it can bring and the methods to achieve success. It’s not a trend so much as a permanent fixture in the organization which will have a measurable long-term impact upon companies and institutions both great and small.