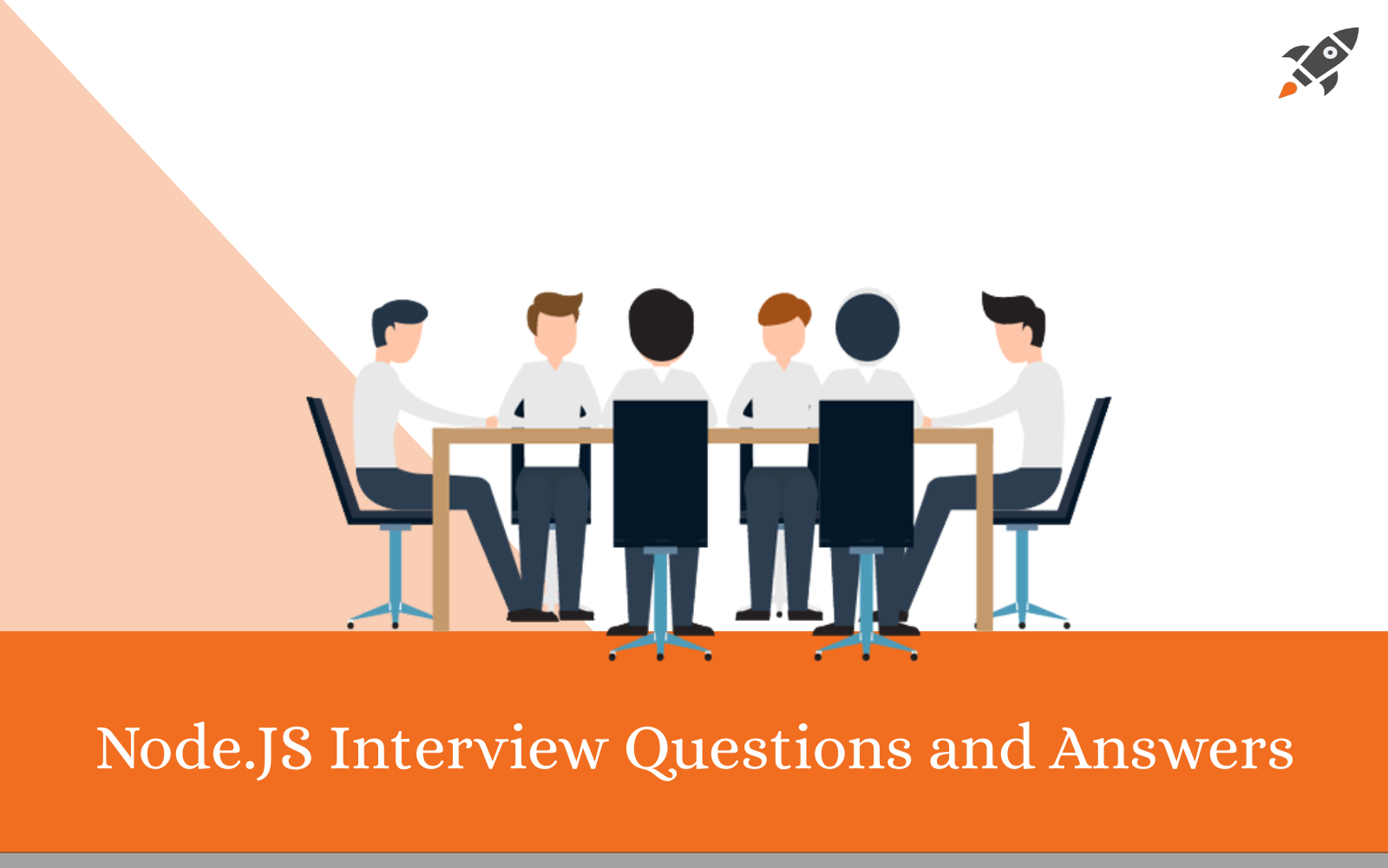 Of late everyone’s been talking about Node.Js and aspires to learn it because the trends of web development seem to be heading its way. The infrastructure of sites like LinkedIn, eBay, and PayPal is based on Node.Js. It allows you to mold your application according to your requirements. No doubt it’s becoming widely accepted these days! Are you planning to go for an interview on Node.Js and anxious about the questions that might arise during the interview! Don’t you worry a bit; we have specially designed the topmost Node.js interview questions and answers to get you accustomed to the variety of questions that you may witness during your respective interviews.

In this section, you will encounter a long list of Node.js questions and answers. We hope that these questions will aid you while answering your questions confidently for your anticipating interviews.

It is an open-source server environment and is built on Google Chrome’s JavaScript Engine (V8 Engine). The applications of Node.Js are written in JavaScript and can run on various platforms like OS X, Windows, Linux, Unix, Mac, etc.)

Node.Js uses Google V8 Engine because Google V8 is a runtime engine of Chrome. It helps in the conversion of JavaScript code into native machine code. This enables the application to run more smoothly and swiftly.

Node.js is a virtual machine and primarily works on a V8 environment. Through non-blocking, I/O and single-threaded loop Node.js is capable of attaining high output.

The full form of I/O is input and output. It can get access to anything that is outside your application. Once the machine starts, it’ll be loaded onto the computer memory to run the program.

Given below are the most significant features of Node.Js:-

The APIs of Node.Js library are nonblocking i.e. (asynchronous). They are primarily concerned with the fact that the server doesn’t wait for an API to come back with data rather it moves onto the next API.

Asynchronous functions continue to react to the request for which it has already received in the server response whereas non-blocking immediately responds with whatever data is available and continues running as per the requests.

Control Flow function is primarily concerned with the sequence in which statements or functions are executed.

Callback hell refers to a nested callback which is heavily nested. For this reason, it is difficult to read and to maintain.

Callback can be avoided by doing the following;-

Promises are actions that are either completed or rejected. These are proxy for a value that might not be returned if the function from we expect a response doesn’t deliver.

The REPL in Node.Js stands for “Read Eval Print Loop”. It is a simple program that does the following-

It provides an environment that is somewhat similar to that of Unix/Linux shell in which the user can enter the command and the system in return responds with the output.

Consistent style is necessary as it helps the team members to make changes in the projects easily without getting accustomed to a new style each time. Tools that can help to assure it are — Standard and ESLint.

2. Core Modules – Usually, these modules get loaded just after the initiation of the Node process.

3. Local Modules – These are often created locally by the user. The modules may have several functionalities that can be distributed through the Node Package Manager.

“Express” is the most compatible framework which is utilized in Node.js.

Of course, Node JS is far better than python to build real-time applications as –

Check Out  – Python vs. Node.JS: Which One is Best for Your Project?

Node.Js already contains a debugging utility called as a debugger. To initiate the debugging you have to start the Node.Js with the debug argument accompanied by the path to the script to debug.
Then you have to insert the statement debugger into the source code of a script. This will enable a breakpoint at that particular position in the code. This is how any application in Node.Js is debugged.

This file should be present in the root directory of every Node.Js module. One is supposed to utilize the same file name with the same case “package” and the same file extension “*.json”.

Libuv is a multi-platform support library. The main focus of Libuv is on asynchronous I/O. It is utilized by Node. js, Luvit, Julia, pyuv, and others. Libev supports only select(2), it doesn’t have the provision to support poll(2) and IOCP on Windows.

Scaling of Node.Js application can be done in the following ways:-
1. Breaking the application into microservices.
2. By cloning using the cluster module.

Making use of the modules is a prerequisite for the purpose of developing thorough applications and software systems if you are using Node.js.
If for instance, modules are not present then the code will disintegrate and it will be difficult to run the application.
Modules in Node.Js are used, to sum up, all the related codes into a single unit of code. This in turn is interpreted by shifting all related functions into a single file.

Node.Js should not be used in applications that require long processing time or takes too much time for calculations.

We earnestly hope that this article will be of great benefit to you and if in case any query arises related to this, feel free to ask in the comment section!