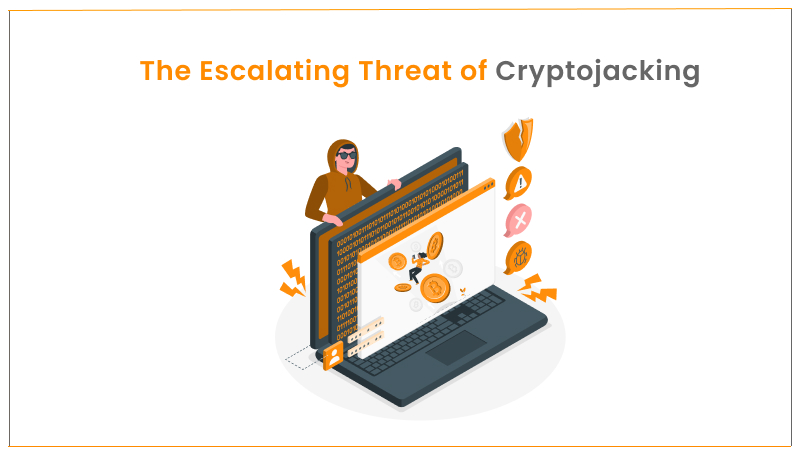 Cryptojacking definition is a form of crime committed in the cyber world involving unauthorized access to catch hold of cryptocurrencies. Everyone is aware of the value of cryptocurrencies in the present era which is why it makes it even vulnerable to get them stolen from somebody’s computer system.

What Is Cryptocurrency Mining?

The phenomenon is a bit complex and involves data blocks and blockchain. It includes all records right from transactions to public records (ledger), popularly called a blockchain. Thus, cryptojacking is a legal terminology that manifests the act of mining cryptocurrencies through illegal means. After learning about cryptojacking meaning and cryptocurrencies, let us see what led to the rise of crypto malware.

The Rise Of Cryptojacking

The first known bitcoin mining malware incident was reported in September 2017 when Bitcoin was achieving new heights in terms of its market value. Coinhive was the pioneer in providing cryptojacking services that allowed website owners to earn additional income from their visitors. Coinhive was a set of JavaScript files that used visitors and users’ resources to mine cryptocurrency for the owner.

Even after an unexpected fall in the value of cryptocurrency in the market in 2018, bitcoin witnessed a surge in midyear and skyrocketed the price of Monero. This reaffirmed the cyber criminals trust in monero as it cannot be tracked publicly and led to the rise of cryptojacking.

In fact, malware attacks have witnessed a sudden drop in October 2019 and so is the case with ransomware. The following section will deal with the working of cryptojacking.

How Does Cryptojacking Work?

In simple words, cryptojacking begins with a user clicking on an unknown link which grants a hacker unauthorized access to its computer power to generate cryptocurrency. As part of cryptojacking, the user unintentionally downloads malicious software that grants cyber criminals access to their computing systems.

Before learning how cryptojacking attack works, we must be aware of how cryptocurrency files are spread by cybercriminals. It is important to know that crypto mining software is flagged as malware in some cases which is why they go undetected.

Cryptojackers receive cryptocurrency coins when they add a new block to the chain. Once received access to the reward, hackers directly put it into their digital wallets

The first method is file-based cryptojacking. This involves sending malicious emails which contain attachments or link that seems legitimate.

On clicking, the code gets executed, and it downloads the crypto mining script onto the computer system. The user remains completely unaware about the working of the script in the background and it runs continuously.

Another method is browser-based cryptojacking. In this method, hackers create a cryptojacking script and embed it onto multiple browsers.

The cryptomining script uses a programming language and runs once the code is downloaded. In addition, these scripts can be embedded in ads as well as WordPress plugins.

Cloud Cryptojacking is one of the most difficult methods but if cracked it gives hackers absolute access to a company’s files and CPU resources.

To get access to an organization’s CPU systems and cloud services, cryptominers go through the codes and files for API keys. Once successful, hackers can siphon loads of confidential data and cryptojack important information for currency.

The cryptocurrency mining examples provided here are quite recent. The instances reveal major security lapses or blatant ignorance on the part of the victims/companies.

Why Is Cryptojacking Gaining Momentum?

There is no doubt about the immense popularity of cryptojacking software in the technological world. There is an article by Jason Bloomberg on Forbes that says that “cryptojacking has replaced ransomware as being the most popular cyber threat in the world”. There are a few technical reasons behind this. First, the software that cryptojacking runs on does not need to establish any link or command with the attacker.

Secondly, crypto mining software is flagged as malware and runs undetected. The only “visible” harm it might do is slow down the system. Thus, cryptojacking is committed by attackers as it mints money without going undetected by the users.

It is hard to determine whether the device is being used for cryptocurrency mining as in many cases it goes undetected. However, there are certain markers that users can be mindful of and know if their device is being accessed by any third party without the owner’s consent.

A strong and aware IT team is the most important aspect of preventing crypto malware. Being aware of the recent trends in cryptojacking can be extremely effective as it would help you know what the cybercriminals are up to. This section will provide you with an overview of how to prevent cryptojacking.

The purpose of this article was to provide a hindsight view of what is cryptojacking, what is crypto mining, and how to detect crypto mining malware. The cryptojacking meaning is a bit complex as it involves technicalities although we tried to make it as comprehensible for our audience as possible. As the demand and value of bitcoin increase, cybercrimes like cryptojacking and ransomware are secretly committed by hackers. Companies need to tighten their data security using a miner blocker. This would help to prevent any unauthorized infiltration into their systems as crypto mining software is flagged as malware.