In today’s article, we will discuss what DAICO is, what are its characteristics and how it works? As to start, it’s an enhancement on the ICO fundraising model that incorporates certain features of DAO’s. In January 2018, Vitalik Buterin suggested an idea by and is aimed at making ICO’s safer by involving investors in the original project development process. It will further allow token holders to cast their vote for the refund of the contributed funds if they are not happy with the progress being made by developers.

For projects that put into practice the DAICO concept, it will strengthen a level of accountability on developers and engineers and give token holders additional peace of mind that they are certain to either see at least a minimum viable product(MVP) or get their money back.

How Does a DAICO Work?

It starts with a Smart Contract in contribution mode. The DAICO smart contracts have a mechanism where contributors can hurl funds to the project in substitute for network specific tokens. When the period of crowd sale ends, the contract will forbid anyone from contributing any further, i.e., normal token sale.

There is one variable called the tap variable that comes into effect after the payment period has ended. This tap in the contract can be programmed to help developers to predetermine the amount (per second) that can be taken out from the token sale funds. Initially, the limit of the contract is set to zero, but token holders can then vote on a resolution to increase the variable of the tap.

There are three foremost elements that DAICO derived from the DAO:-

– First, never put complete trust in a federal team. Capital contributions from the beginning were resolved by the electoral system.

– Secondly, capital accretion is not exhausted at one time but by a system of spending money steadily over time.

– And finally, the chance to reimburse the capital contribution. This judgment is based on ‘crowd consent’, which means that shareholders may vote to take out the remaining funds if the project teams fall short.

How is it Different From an ICO?

The main dissimilarity is right to use funds. With an ICO, once the entire tokens are sold, developers have complete admittance to all the contributed funds. Developers have to compute in advance how much is essential to construct a minimum viable product (MVP) and once they reach this desired amount, called ‘the soft cap’, they can begin to work on the product and expend the money on whatever they think is necessary. In case if they don’t reach this initial soft cap, they have to reimburse the money. But if they do, there’s no further real compulsion.

With the help of DAICO’s smart contracts, contributors can cast their vote on resolutions (during the development phase) to what’s more increase the tap or return the lingering contributed funds (self-destructing the contract). 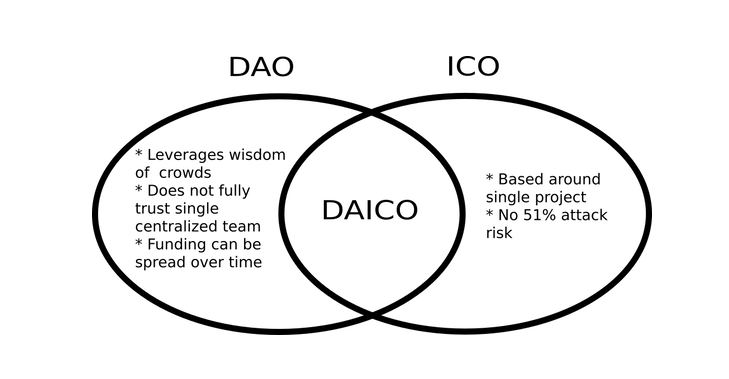 What Are The Benefits Compared To ICO’s?

It puts more power in the domain of investors. Stakeholders have much more to influence and say in the development phase of the project. If they are not contented with how the project is moving ahead, they can set the convention to extract and get a refund. This completely alleviates the risk of scam ICOs where developers cling to a token sale and then went missing with the money as soon as the ICO is finished, without producing any product.

As the sum of funds that get released from the DAICO’s Smart Contract which is limited and strictly controlled, it will decrease the occurrence of around 60% attacks. Even if a 50% attack does occur, where an aggressor wants to propel funds to a chosen third-party, the penalty will be contained to the amount that was authorized to be released by the developing team or the contributors at any one point (the tap).

In the case of an ICO, once the team hoists tens of millions of dollars, it undergoes deterioration in its motivation to execute the project; or, at least, the activity dwindles significantly. With DAICO replica the team’s motivation to bring the thought to life, i.e. to convey the product, is continued over a lifetime period.

What are Some of the Main Characteristics of a DAICO?

It’s tough to say as the notion has never been put into practice yet. However, to answer the question, it is cooperative to look at a project that helps to conduct the world’s first DAICO. The Abyss (discussed below), for instance, a next creation digital distribution platform based on a crypto reward ecosystem, plans to do this with the following DAICO characteristics:

The ABYSS — The First DAICO Project in the World

The ABYSS is the next generation digital allocation stage area, transporting all kinds of video games (Game MMO Free2Play and Crypto game as the main priority), including AAA titles, and into the growing global betting community. Not like other gaming platforms (Steam, Origin, and GOG etc.), The Abyss proffers a revolutionary introductory and motivational scheme that permits gamers to make money not only from the game but from the achievement, social games, and payment systems.

As a conclusion from the above article, we can say that it can be a great model for ICOs which both the investors and the team can gain from. However, one concern is that stakeholders might cast their vote for self-destruction when the price gets lesser than the funds left in the DAICO. This is absolutely a more accountable way to carry out ICOs, where at least the development teams’ payment is tied to their actual performance.

Don’t wait, just log on to www.digitalogy.co and get connected with the world’s top 5% development talent